History of the Rotary Club of Evansville

In December of 1913, one hundred fourteen business and professional leaders gathered at the St. George Hotel in Evansville, Indiana. They formed the Rotary Club of Evansville and elected R. H. Pennington as the first president. The club applied for affiliation to the International Association of Rotary Clubs and received the 102nd charter on March 1, 1914 from what is now known as Rotary International. 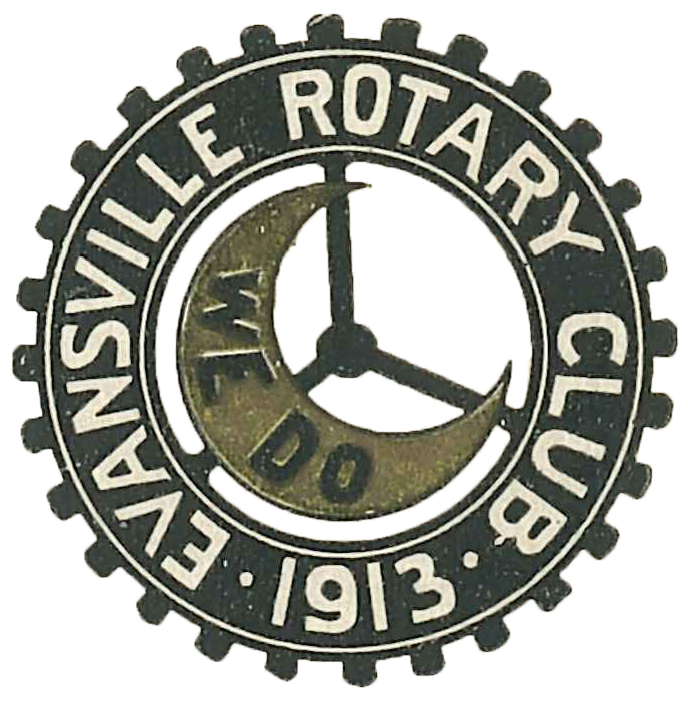 The St.George Hotel was located at the corner of S.E. First Street and Locust Street. It was built in 1874 but was razed in 1915 to make way for the construction of the McCurdy Hotel at the same site. Meetings were held in the Pompeian Room on the ground floor of the magnificent hotel. After the McCurdy, the Club met at the Hadi Shrine, Executive Inn, Soldiers and Sailors Memorial Coliseum and in April of 2012 began meeting in the Walnut Room at the Tropicana Evansville Hotel, formerly Aztar.

In an article appearing in the Evansville Courier dated April 11, 1915, a member of Rotary was described as “coming to his meeting with a big broad grin on his face, expecting to have and to help others have a genuine good time and goes away happier, and better prepared to withstand the worries and cares of business life.” This continues to be the Club’s philosophy to this day.

Over the past 100 years, the Rotary Club’s membership has represented the very best of our community. The litany of these leaders can be found in the roster of those who have received the Rotary Civic Award. This award is given annually; publically recognizing a person or persons for outstanding civic, charitable, humanitarian, and/or cultural services to the City of Evansville. This award has been presented for the past 85 years, beginning in 1927, when it was awarded to E. Mead Johnson, Sr.

The Club was extremely active in civic and social affairs throughout the twenties and thirties. During the massive flood of 1937, the public records reveal that the members of the Club were deeply involved in rescue efforts, housing and feeding those displaced by the flood.

The programs presented at Rotary luncheons over the past 100 years reflect the history of current events within our community and nation. This was particularly true during World War I, the Great Depression, the flood of 1937, World War II, subsequent wars, and the Great
Recession. These programs, as reported in local news media, were all designed to give us hope and courage in the face of adverse circumstances while remaining steadfast to the original motto “He profits most who serves best.”

The Rotary Club did not overlook its obligation to the youth of our community. It provided the funds to construct and maintain the “Monkey Ship” at Mesker Zoo in the late 1930’s. During the holiday season, a special meeting and program was provided for the children of the members. During one of these events, a small elephant was brought to the Rose Room at the McCurdy Hotel as entertainment from the Mesker Zoo. In 1965, the Club began sponsoring an annual luncheon honoring all of the scholars from the city’s high school who posted a 3.0 average.

The Rotary Foundation of Evansville was formed in 1990 for charitable and educational philanthropy, with current endowment assets of over one million dollars. Our foundation makes it possible to implement hundreds of local projects to benefit education, recreation, and those in need in our community, along with numerous international projects that help to build or rebuild impoverished communities, provide clean water and eradicate polio.

With the aid of a matching challenge grant from an anonymous Rotarian donor, the Rotary Club of Evansville raised $40,000.00 to build not one, but two Habitat homes in 2000 and 2002. The Club pitched in not only money, but also the labor of its members.

In 2003, the Rotary Club, in partnership with the Evansville Parks Department and the Parks Foundation, took on the challenge of the construction of the Rotary North Woods Nature Trail. This trail, over 4000 feet long winds through the woods on First Avenue, and provides access to the naturally wild interior of the 20 acre tract.

In 2004, when a community needs assessment identified children’s health and obesity as a critical issue, the Rotary Club responded by developing the Rotary Youth Fitness Center located inside YMCA’s downtown location, partnering with Junior League of Evansville and Welborn Clinic, this project was designated as the Club’s Centennial Project commemorating the 100 year anniversary of Rotary International.

The Rotary Club of Evansville partnered with the Wesselman Nature Society in an effort to provide an environmental education center at Howell Wetlands, a 35-acre urban wetland just west of Howell Park. The wetland complex serves as an ideal outdoor classroom for area schools, providing restrooms, and storage for educational and maintenance equipment.

Since 2007, Over 600 volunteers have participated in the St. Mary’s Reading Rotarian Program impacting more than 25,000 first graders in 1,125 classrooms. Our Club in partnership with the Love Foundation and the Public Education Foundation has awarded $657,000.00 in Classroom Enrichment Grants impacting more than 28,000 students in our public, private and parochial schools. The Rotary Club of Evansville raised $125,500 for the Rotary Canoe Kayak Launch located just off Green River Road north of Lynch Road. Construction of the project was completed in 2013, creating access to the area’s first blue trail, over six miles of waterway for paddling, fishing and exploration.

The Club remains one of the largest and most highly regarded service organizations in the Evansville community. As in the past, we are united in the belief that along with success comes the obligation to give back. Today, the club has more than 200 men and women in its membership. Women first joined the Club in 1987 and have played key roles in Club leadership since that time.

There are no upcoming events at this time.